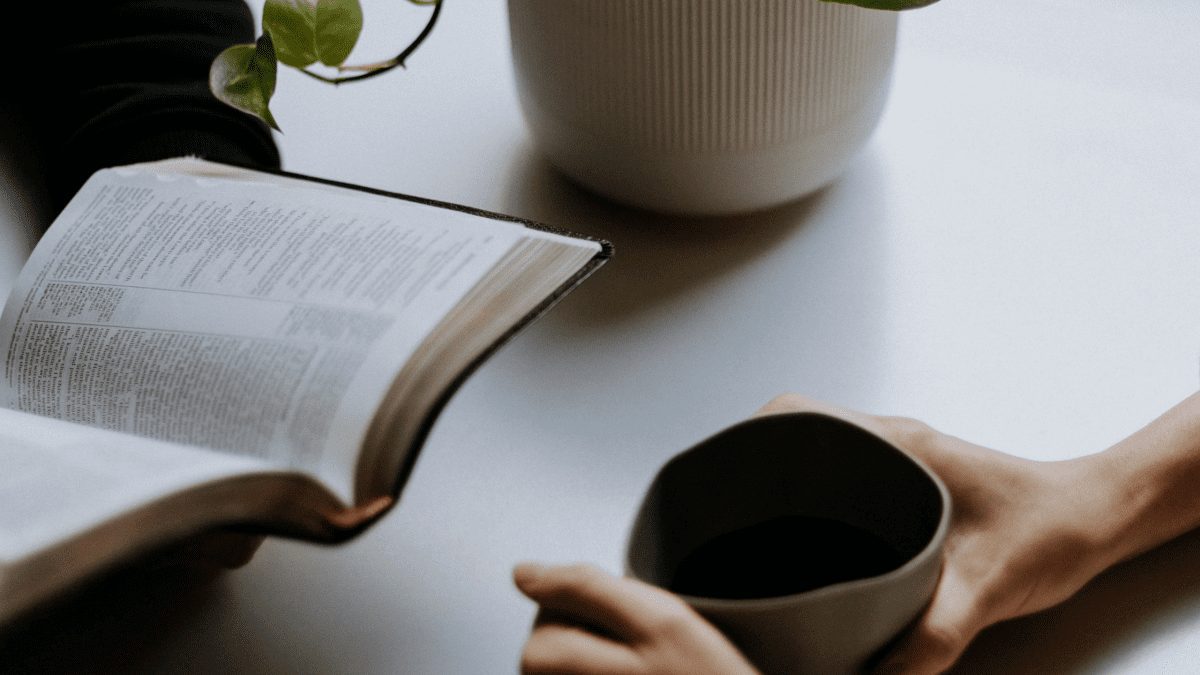 The Corrupting Power of Sin – The Bible in Lent: Day 9

Today, as we work through The Bible of Lent Bible Reading Plan, we’ve come to some familiar passages. I’ve written before about Hannah’s prayer at Shiloh and even with declining biblical literacy culturally, there are still few very people who haven’t heard of David slaying the giant Goliath with his pebbles and slingshot.

Unlike some of the other books thus far in The Bible in Lent, I’ve read through 1st Samuel before now.

I remembered Saul as being mostly the antagonist of the book – disobeying the Lord, attempting to kill David despite David’s mercy, and consulting with a witch to perform a seance. But my memory had glossed over Saul’s humble origins.

Saul’s beginnings do not indicate the man he will become before his death. When we first meet Saul, the Bible tells us he is a handsome young man and a man of wealth (9:1-2). Yet, when Samuel chooses Saul by lot as their king, the people find Saul hiding among the baggage.

Despite his initial hesitation, the people rally around Saul when he calls on them to defend their fellow Israelites. When the people want to kill those who opposed him, he shows himself to be a man of peace and mercy, not vengeance.

Yet, that so quickly that changes, and he is sealed in my mind as a man with a paranoia for being unseated and an irrational desire to kill the man who was favored by the Lord and had done nothing but bless him.

Just a few years after being anointed king, he disobeyed the Lord for fear of the people (15: 24). In an attempt to cover up his sin, he told Samuel they would sacrifice the animals they were told to destroy as an offering to the Lord.

The rest of 1 Samuel tells the stories of Saul frantically trying to maintain authority apart from the Lord.

It was a stark warning to me of how seriously we must battle sin.

“Sin is couching at the door; its desire is for you, but you must master it.” – Genesis 4:7, RSVCE

Saul went from a man who was hiding to avoid being named king to a king who spent years hunting one of his most loyal and fierce warriors because of his pride.

How quick and easy it is to lose ourselves when we stray from what God has instructed.

Has the Lord as great delight in burnt offerings and sacrifices,

as in obedience to the voice of the Lord?

Surely, to obey is better than sacrifice,

God calls us to obedience.

And He blesses us, just as He would have blessed Saul when we walk in that obedience.

God’s commands are not suggestions. He desires hearts that trust that His plans for us are good and His words are trustworthy. It is the same battle, the same question that Eve faced in the Garden. The underlying wonder of, “Is God holding out of me?” The sowing of doubts in our mind that His commands are for our benefit.

Saul disobeyed the Lord, then offered to sacrifice to make up for it.

But God doesn’t want sacrifice, He wants our hearts.

So God appointed a king who would seek after His heart. 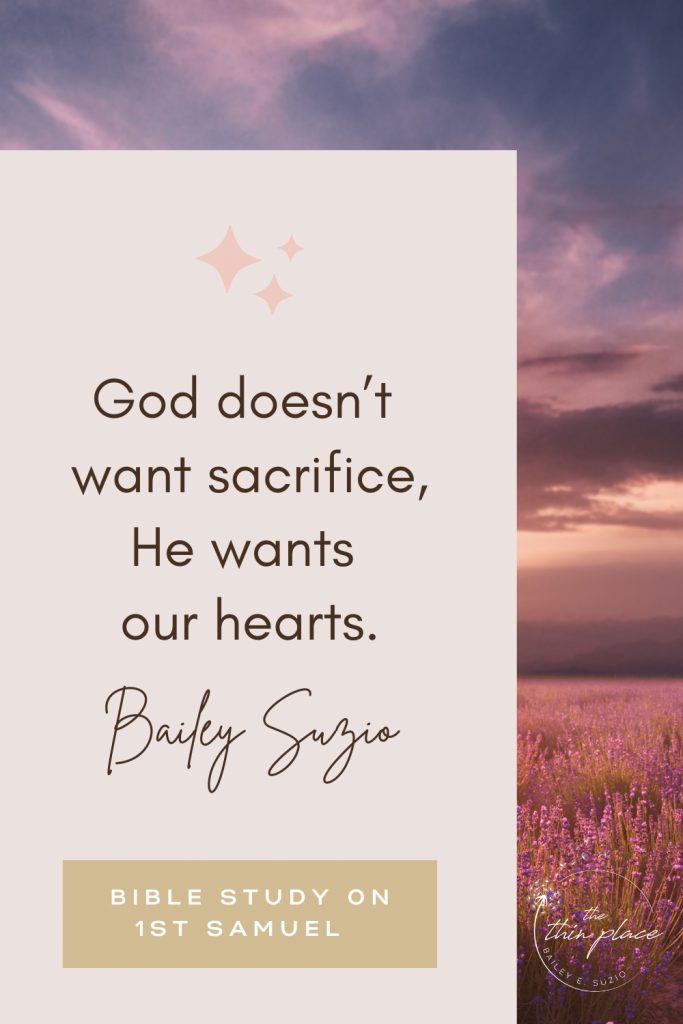 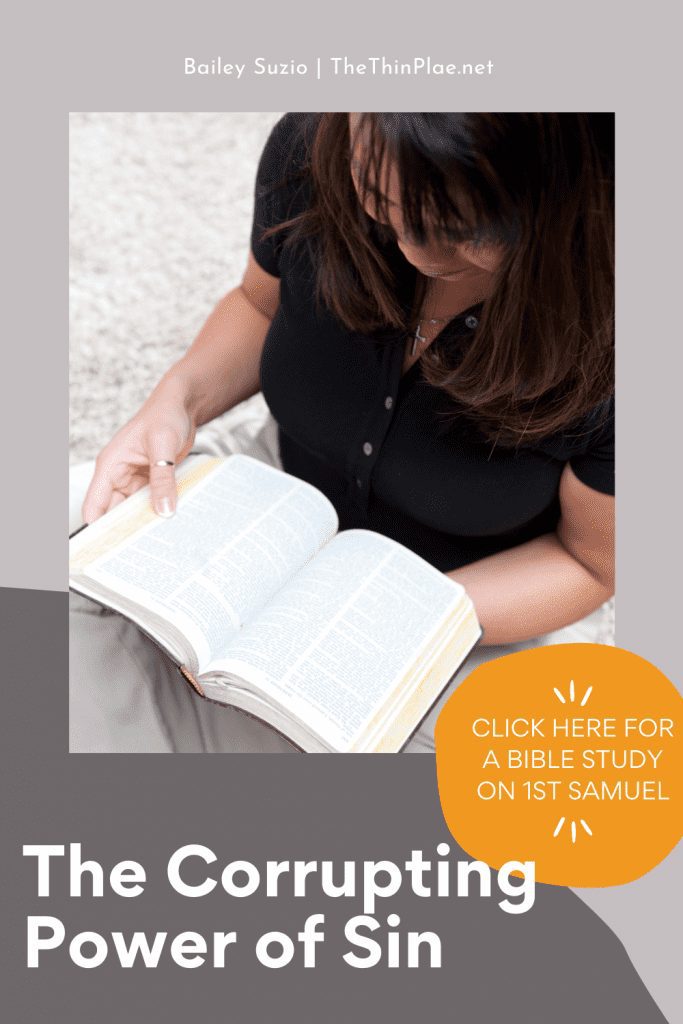 How often do I choose to ignore what I know the Holy Spirit is prompting me to do?

The thing God has clearly commanded, how often do I push them aside with the excuse that I will do something grander later?

How often am I unwilling to be inconvenienced or do I hold back out of fear of what others will think?

How often does my pride simply whisper no, my way in my heart as I take a step to left or right from the path He set before me?

God wants my heart, all of it, trusting in Him.

I want to make Saul the antagonist of 1st Samuel because I don’t like to admit that sin leads us down paths we never intended to travel down. I like to think that my sin is palatable, controllable, not something wicked and wild that would lead me astray and turn my heart from the God who loves me.

But of course, sin takes no prisoners and offers no quarter. We cannot treat sin lightly because sin does not deal with our souls lightly.

The Book of Numbers: We are a Forgetful People – The Bible in Lent: Day 5

Let Your Heart Be Good Clay in the Hands of the Potter: The Bible in Lent Day 25

Communal Confession and Encouragement: The Bible in Lent – Day 15