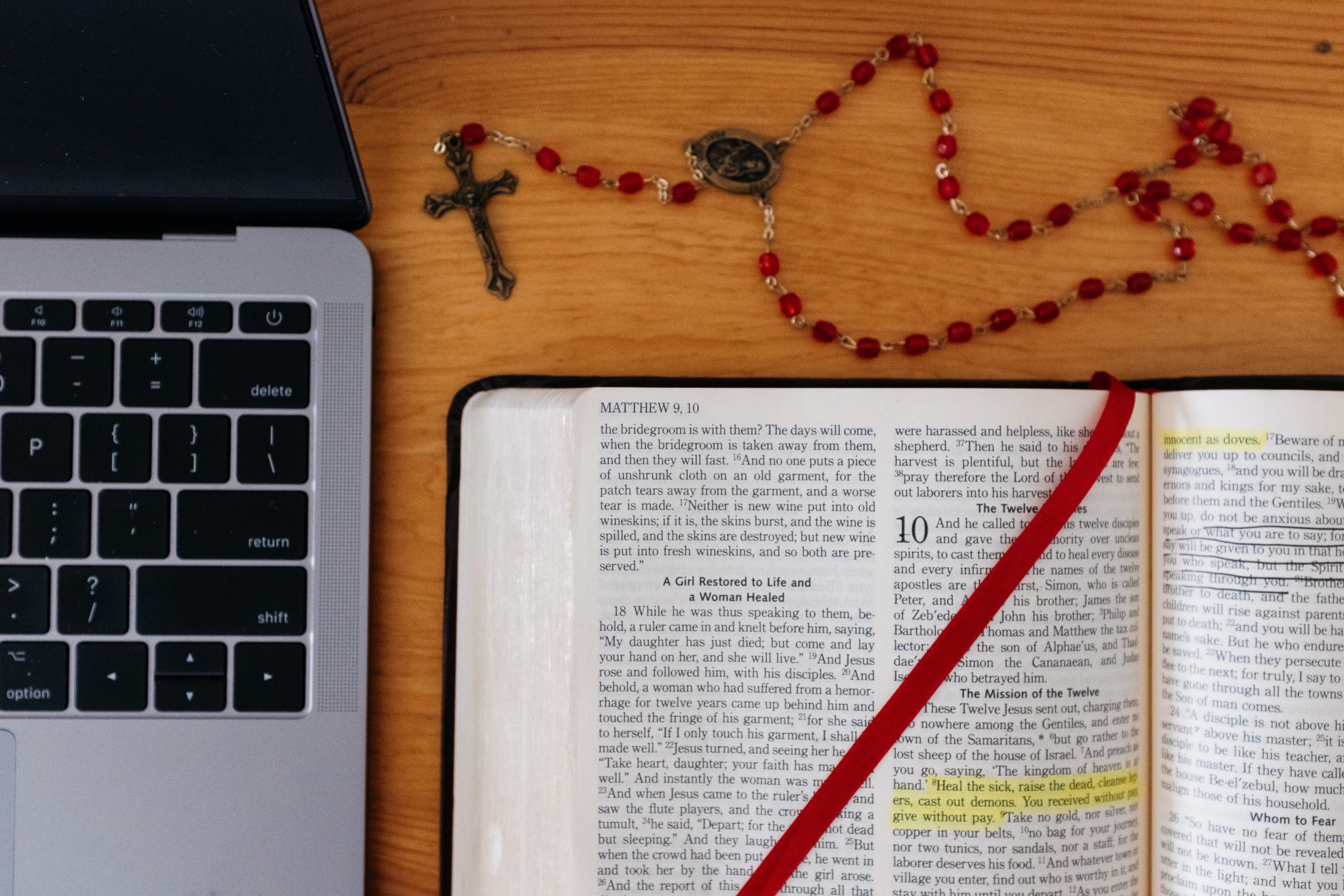 In light of my recent announcement about being welcomed into the Catholic Church last year, I wanted to share the answers to a few frequently asked questions about Catholicism/my decision to join the Roman Catholic Church. This is far from an exhaustive list of questions, but is a start and will be updated periodically as I received other questions.

Obviously, I am not a theologian. I haven’t been to seminary. I am simply a layperson trying to articulate in simple terms answers to questions I’ve been asked about my faith.

You can also find the answer to some of these (and a few other) questions saved in my Catholicsm Q&A Instagram highlight!

While I know that some of you might be excited that I’m Catholic, discouraged because you think I’ve departed your faith, or confused because you thought I already was Catholic, or somewhere in-between, I hope you can extend me that charity of assuming that this was an informed decision made because of my love for Scripture and a desire to serve the Lord.

With that disclaimer, here are some frequently asked questions about my conversion to Catholicism:

Does this mean you follow the teachings of men over Scripture?

The “Scripture alone” vs. “Scripture + Tradition” was one of the biggest things I wrestled with. Ultimately, I don’t think “the Bible alone” is taught anywhere in the Bible. In fact, I think there’s a MUCH stronger Biblical case for needing to follow both the Holy Scriptures and teachings passed down from the apostles and determined in ecumenical counsels (like the one in Acts 15). The more I studied Scripture, the more I realized it was pointing me back to the Church as the pillar and foundation of truth (1 timothy 3:15). Scriptrue was compiled and defined by the Church leaders – if I trust that the Holy Spirit inspired them to define which of Paul’s letter were and were not Scripture, I can trust the the Holy Spirit will also guide them in proper interpretation.

One thing that’s of key importance is that Tradition never contradicts Scripture – the goal is always faithful interpretation as it was handed down through the apostles.


Legalism is depending on a moral code for your salvation rather than the work of Christ. It is law over mercy. The Roman Catholic Church has been a deeply merciful church. It is uncritical thinking and disingenuous to assume that teaching a definitive moral code automatically equates to legalism. They are uncompromising on the need to flee from sin and strive for virtue, but over and over again I’ve seen the heart of the Father welcoming the Prodigal Son home. That has been the attitude I have personally experienced and seen taught in the Catechism. 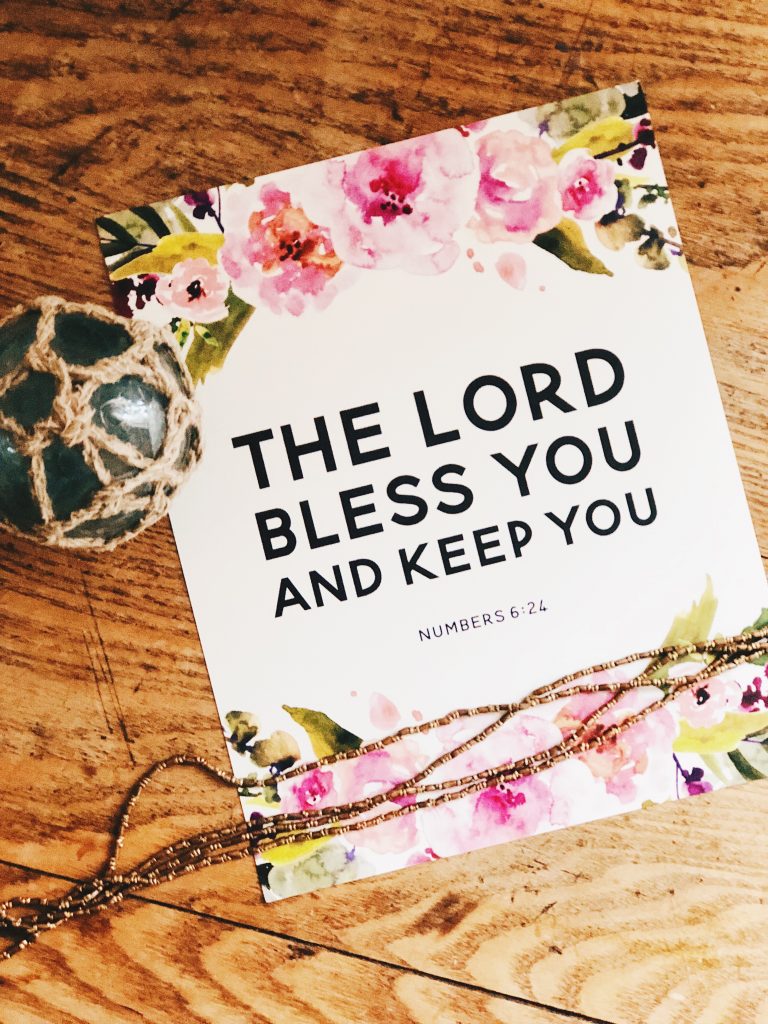 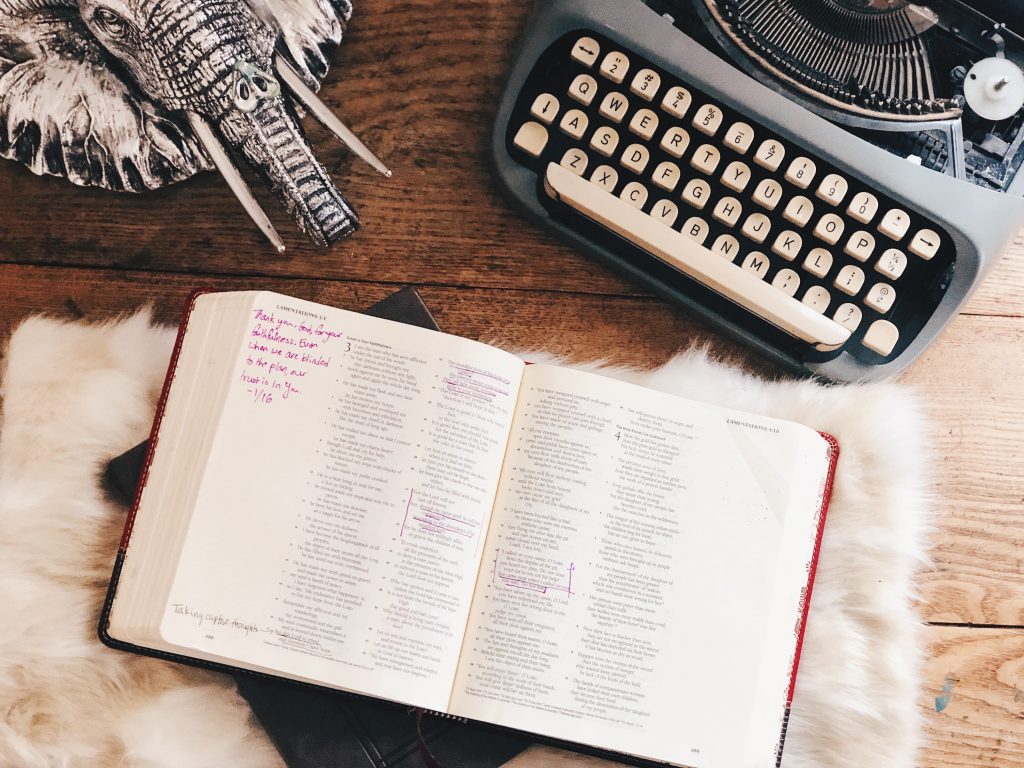 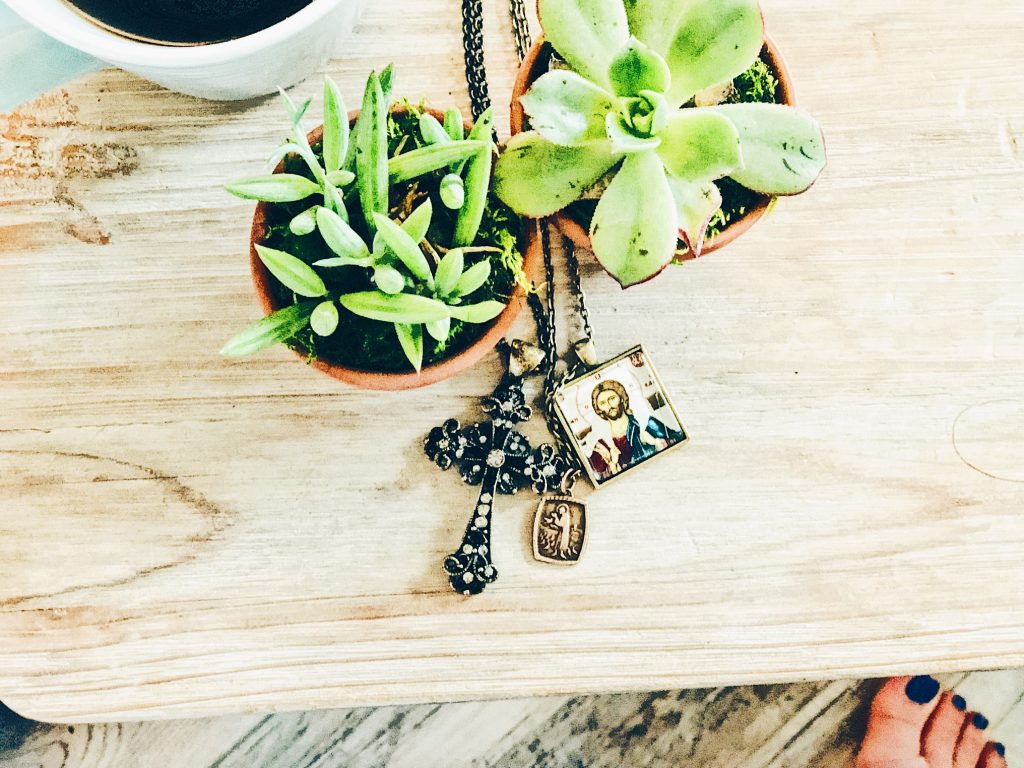 I will answer this question with another question, “What about James 2:24?”

There’s a lot of nuance to Scripture.

Taking a single verse as a “slam dunk” theological argument generally isn’t helpful. But to summarize, I still believe I’m saved by faith, just not by faith alone. Here’s a quick article that goes over some common objections/verses on both sides of the discussion.

Does this mean you worship Mary and the saints now?

In short, no. But I won’t give a snarky answer and pretend like I don’t know what you’re addressing. I do believe that our God is the God of the living, not of the dead, and that those who have died in Christ are still an active part of the Body of Christ, not dead previous members of the Body of Christ. Because I believe they are alive in Christ, I do believe they’re interceding on behalf of the Church on earth and ask them to pray for me. I do not worship or adore them as I worship the holy God who created them and offered His life in atonement for their sins but I do ask for them to intercede for me.

What about the scandals that have occurred?

The scandals that have occurred in the Catholic Church in America are horrific. Full stop. I believe that, as a Catholic, I need to do all I can to hold those who have committed atrocities in the name of Christ accountable and need to work to make sure that things are put in place to help protect innocent people from abuse.

But I also see scandal in so much of the Bible and throughout Church history. Satan working to undermine those serving the Lord shouldn’t surprise us. Sin shouldn’t surprise us. What should shock us is a false narrative that Christians have it all together and are sin-free and a desire to hide sin to maintain a facade. While I’m horrified and grieved by the sins of the Church, I’m glad they’ve been brought to light and hope that we can move forward with a stronger commitment to holiness and better policies in place to protect the vulnerable.

What about papal infallibility?

I had a really skewed perspective on papal infallibility as a Protestant. I assumed that everything the pope said or did automatically went into the infallible category. Like, the pope could do no wrong. That’s not what the Catholic Church teaches. It’s actually a very specific type of teaching that’s not nearly as all-encompassing as I thought not as commonly used as I imagined.

Here’s a quick video that gives the conditions for papal infalability (Note, he mentions 2 examples of when this has been used. Two. This isn’t something that is invoked on a regular basis):

Aside from the fact that it was a much smaller teaching than I originally supposed, I also became pretty convinced through my study of Church history that the pope was recognized in the early Church and that there was a strong Biblical precedent. I have a hard time intellectually with Protestant interpretations Matthew 16 and, prior to Catholicism, felt like this (and many other passages) just didn’t make sense.

Why do you confess to a priest instead of just going to God?

All I will add is that Confession has been one of the most beautiful experiences in my life. I was nervous and felt awkward before my first confession. I felt with tears of joy and a deep, overwhelming sense of the mercy of God and the love Christ displayed in dying for my sin. Not just a general feeling, but a very specific feeling that the sins I had just confessed were forgiven and with me no more. 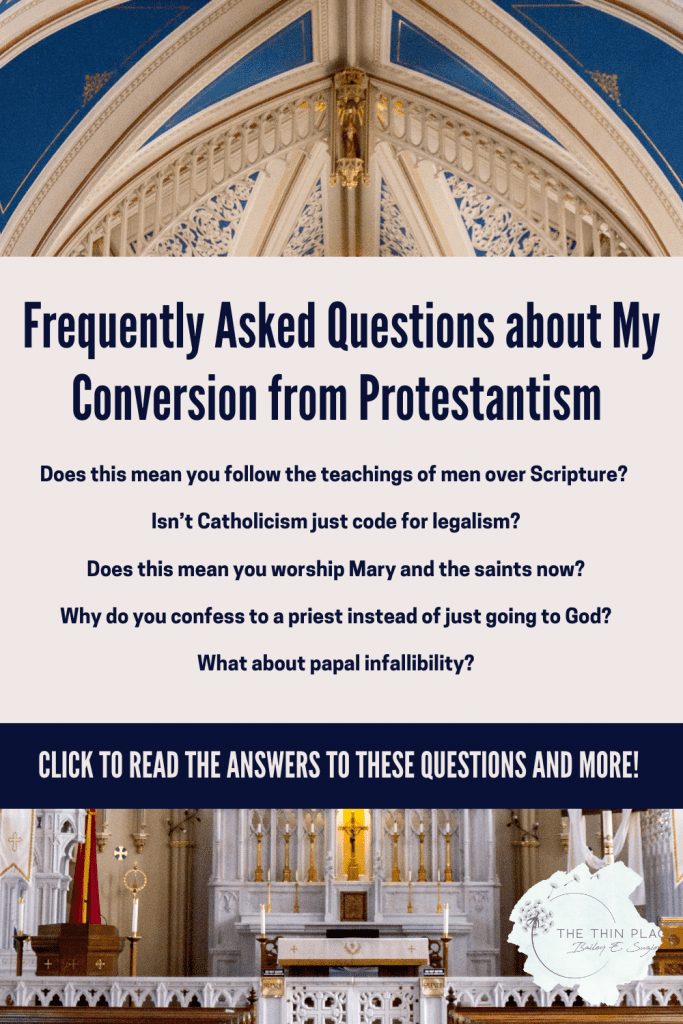 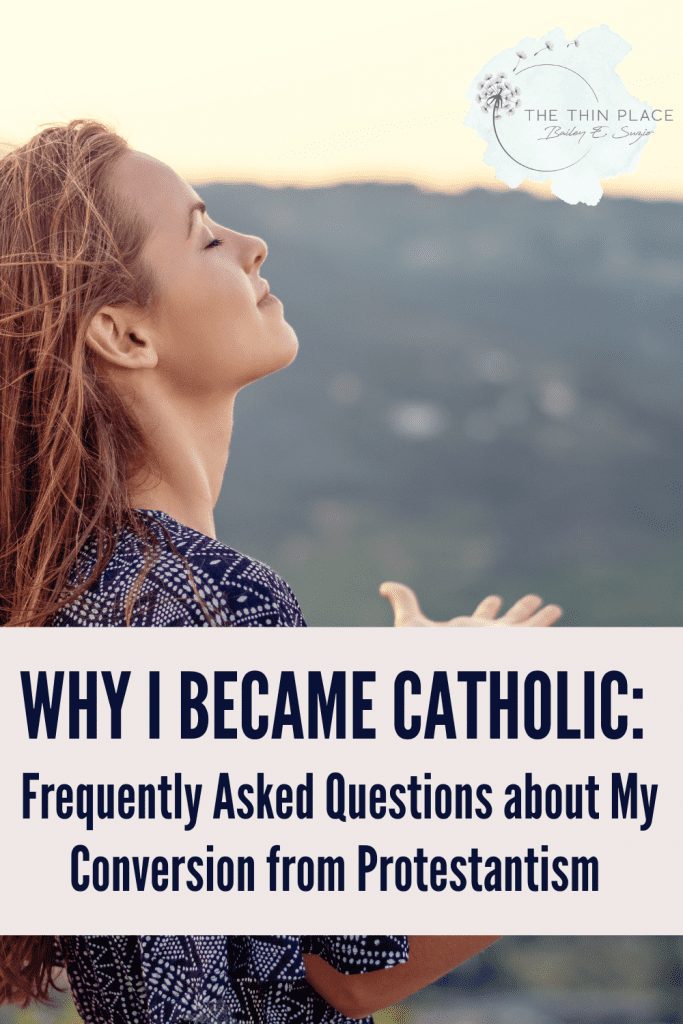 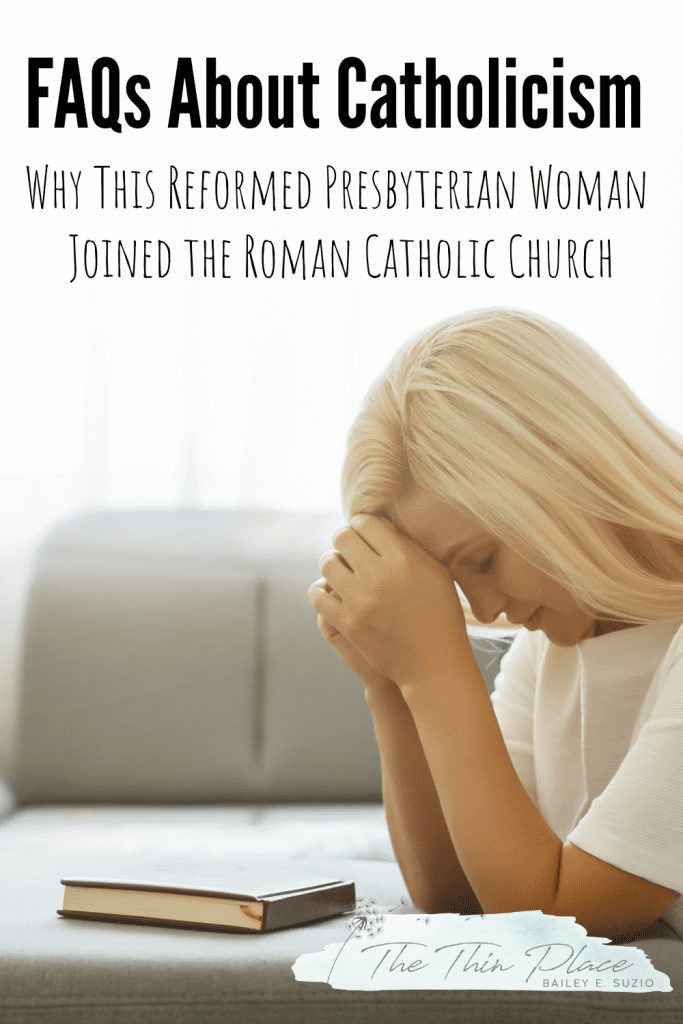 What does your family think?

While this wasn’t a surprising decision for those close to me, it wasn’t an easy decision for everyone to accept. I’m very appreciative for the family members, especially my mom, who wrestled through my theological questions and searching through Scripture. For those friends and family, even if we disagree, there is mutual respect for each other’s position. It is easy to misalign or assume the worst of other denominations or viewpoints when you’re not genuinely engaging with them, trusting that those believers are also seeking to serve the Lord. I’m so grateful for those who have given me the benefit of the doubt and trust that, just like them, I’m following the path the Lord has put in front of me.

Other family members have been unwilling to engage in conversation or ask why I now think the Roman Catholic Church is the church that most closely aligns with Scripture which has wounded me deeply. I pray regularly that God will soften all of our hearts to allow us conversations in the future that will help us love each other better than we have in the past.

Do you have questions about the Catholic faith? Share below!

Pride and Knowing Your Worth: 4 Questions Christians Must Consider