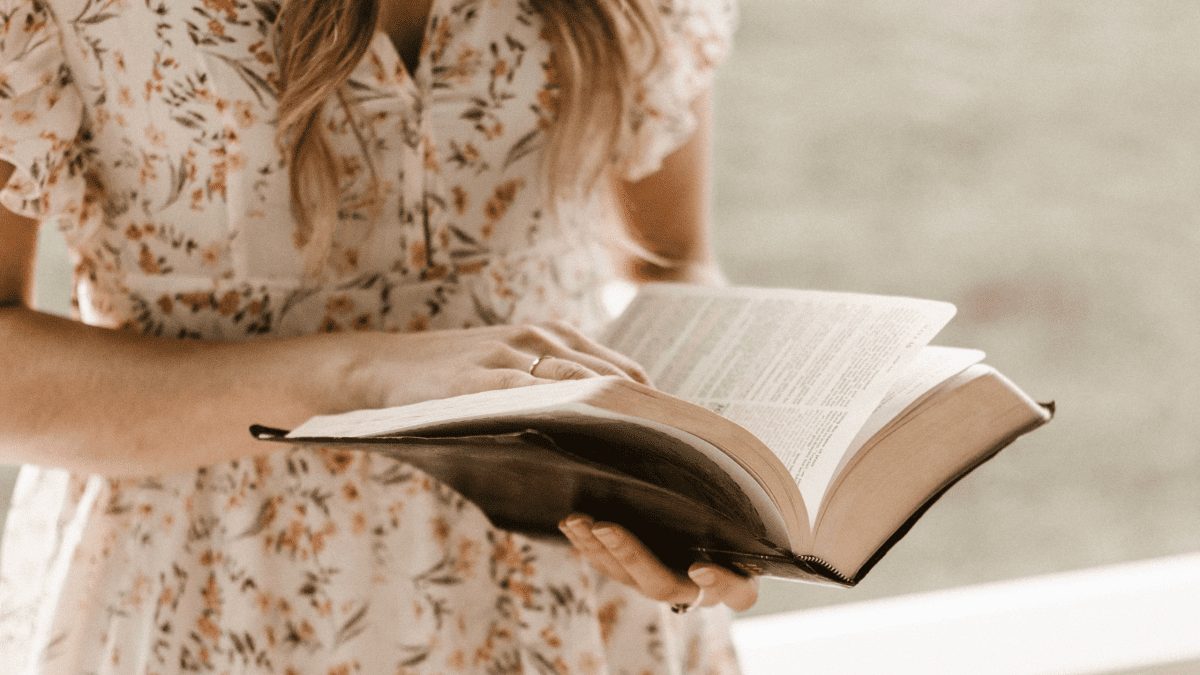 An Overview of the Apocryphal or Catholic Books of the Bible

Until I read the entire Bible this year for the Bible in Lent challenge, I had never read most of the Deuterocanonical/Apocryphal books of the Bible. When I did this, I realized that, aside from a vague notion of Maccabees from Hanukkah books, I had absolutely no idea what the rest of the books contained.

An Overview of the 7 “Apocryphal” Books of the Bible

If you’re like me and are looking for a basic overview of these 7 books of the Bible, here’s a quick guide.

Wisdom is very similar to the book of Proverbs. It’s full of poetic principles and outlines how to live life well. Written around the time of the Maccabean revolt, it is written in the style of Solomon (and is sometimes referred to as “The Wisdom of Solomon”( but was written by later authors.

Tobit is a narrative book. Like Job, it begins with a man who served the Lord but was met with misfortune so great that he begs the Lord to let Him die. At the same time, a young widow across the country is making the same request. God answers both of their prayers through the intervention of the angel Raphael who, in disguise as a man, helps Tobit’s son on a journey. 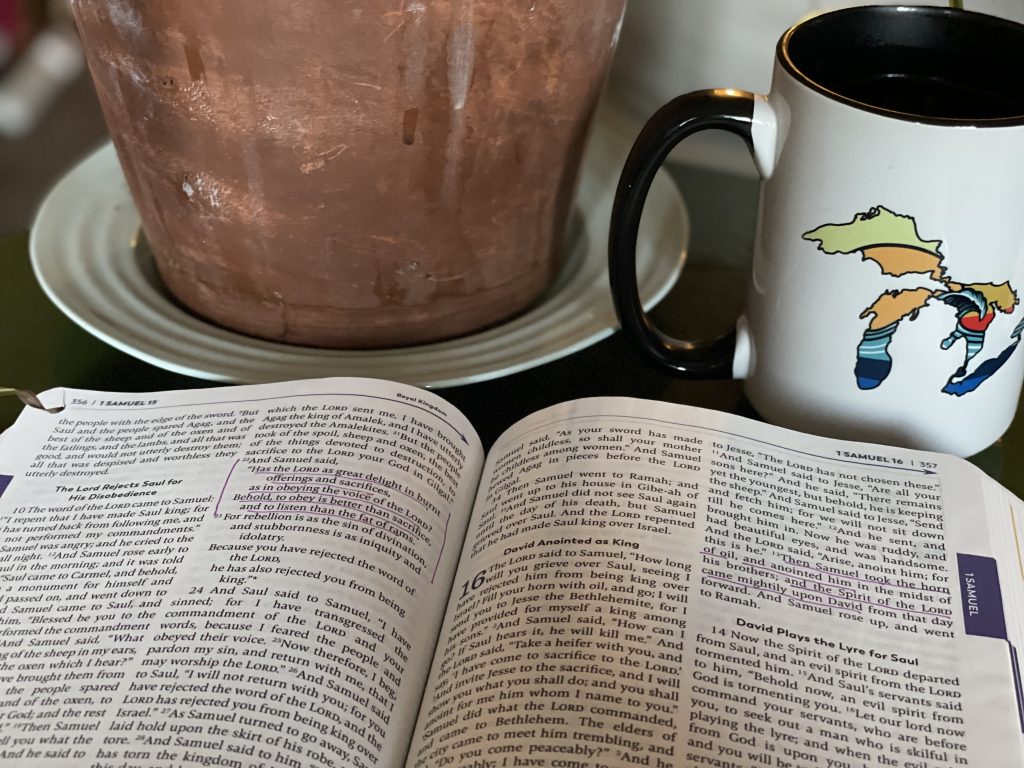 Judith is another archetypal story of the battle being won at the hand of a woman, seen also in Judges and Esther. During the reign of Nebuchadnezzar, an army is sent to destroy the mountain town that Judith lives in. The people are greatly distressed and death seems to be the only option. Judith, a wealthy widow, trusts in the Lord and ultimately, kills the opposing military leader and brings peace to the people. One of my favorite parts of the book of Judith is that it tells us of the conversion of a man who initially sets out to fight the Jewish people coming to believe in the God of Abraham, Issac, and Jacob.

The books of Maccabees are a rough read. They detail the suffering the people of God endured while their enemies attempted to control their land and wipe out their religion. It is a book of great suffering as many of the faithful are killed but it is also a book of great bravery and trust in the Lord in the midst of trials. It is in these books that we find the origins of Hanukkah.

Baruch, as you may recall from the book of Jeremiah, was the scribe of Jeremiah. This is a prophetic book written by Baruch calling the people of Jerusalem to repent of their idol worship and return to the Lord.

The book of Sirach is part of the Wisdom literature of the Bible. It was also written during the Maccabean revolt to encourage the people to hold fast to their Jewish faith and not to neglect the traditions and commandments handed down to them.

I hope this quick overview gives you a bird’s eye view of the books that are unique to the Catholic/Orthodox Bibles!

Why aren’t these books in the Protestant Bible?

Like most of the divides in the Catholic and Protestant conversation, there is a lot of nuances. Luther’s own translation of the Bible included these books although he moved them to a separate section. They were also included in the King James Bible of 1611 and the Geneva Bible even though they were viewed as apocryphal or “outside of Scripture.” It was not standard even in Protestantism to exclude these books from the Bible printing until 1825. You can read more about Protestant translation efforts and their inclusion of the Apocrypha here.

Essentially, there is a lot of historical evidence that the church throughout history considered these books a part of the Bible. But earlier in the Church, we see evidence of Church leaders such as St. Polycarp, St. Clement of Rome, Origen, St. Athanasius, St. Jerome, and St. Augustine,  affirming some or all of these books as Scripture. 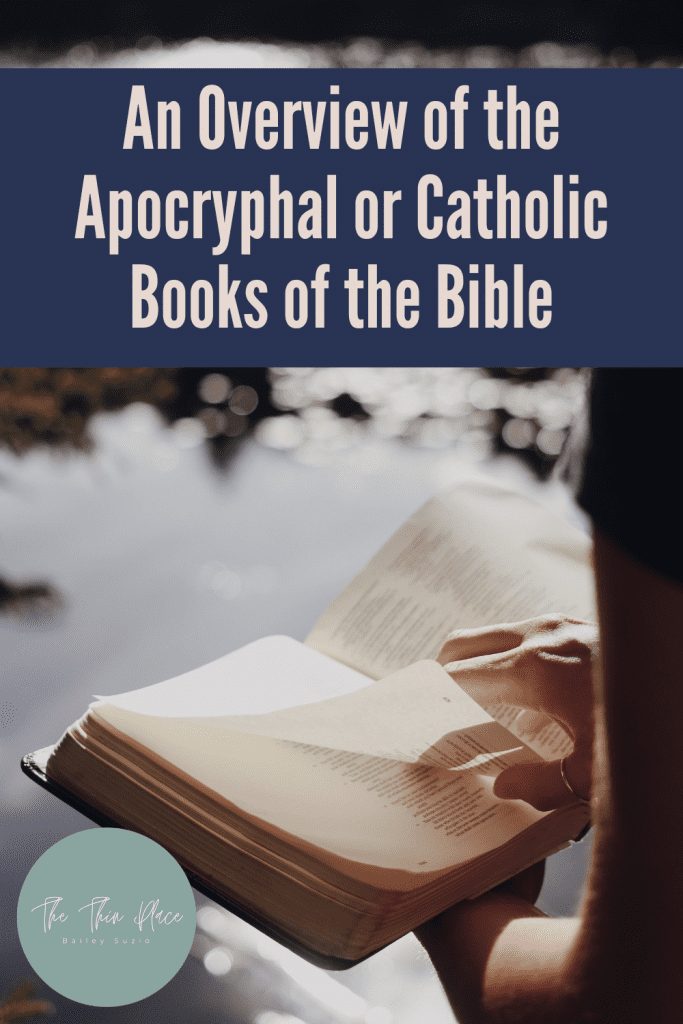 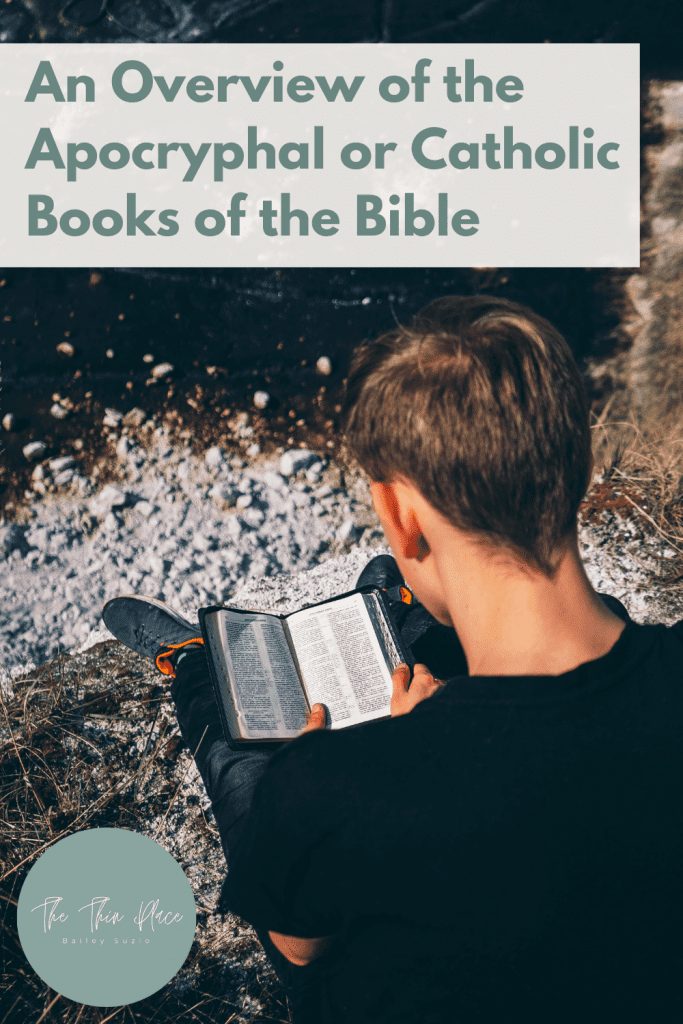 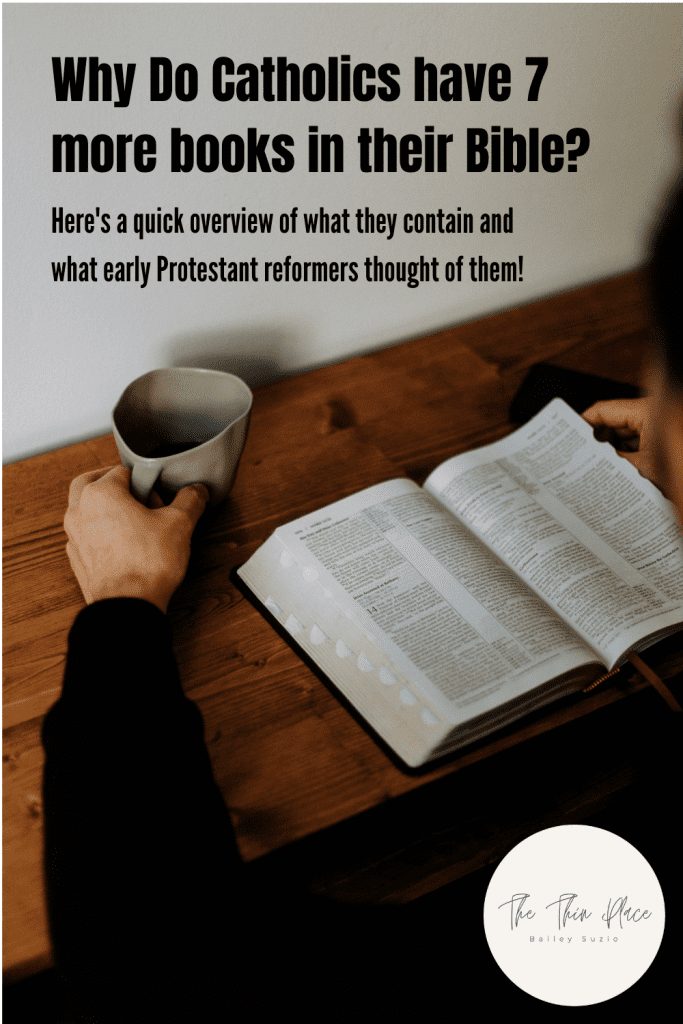 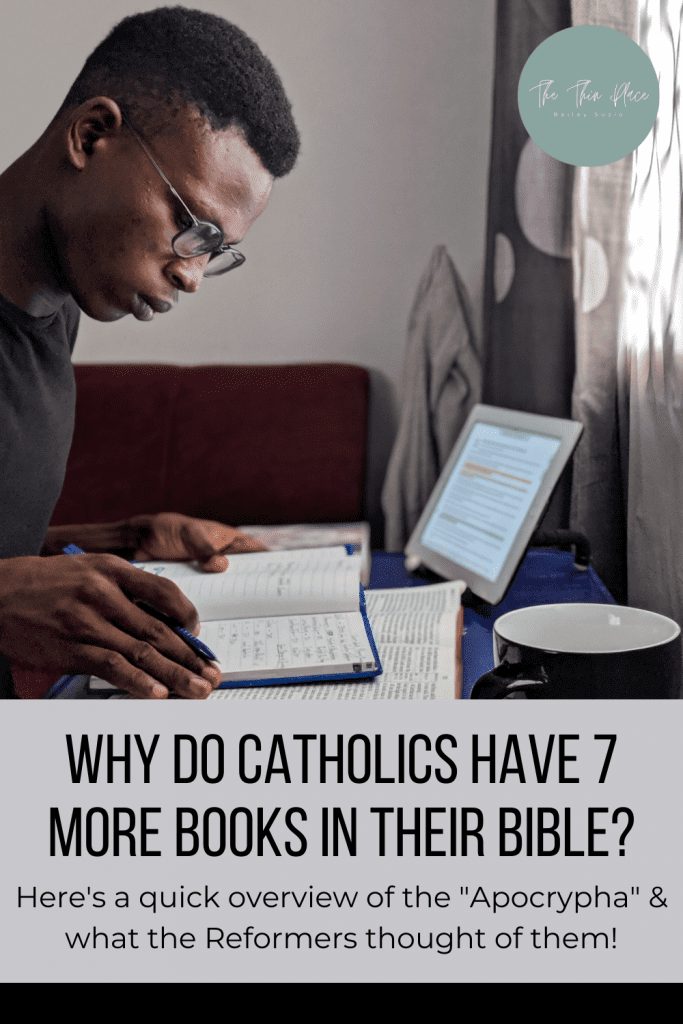 Where can I read the Apocryphal books?

If you’re wanting to read some of these books to familiarize yourself, I’d recommend starting with Tobit or Judith. Both are shorter, easy-to-read narratives that tell interesting stories about God working on behalf of His people. Similar to Esther, they can easily be read in one sitting. (Speaking of Esther, did you know that the Catholic and Orthodox Bibles also contain additional chapters in Esther and Daniel? Discovering the prayers as Esther and Mordecai was a beautiful surprise earlier this year. You can read them here.)

While I believe these books are Scripture and “is inspired by God and profitable for teaching, for reproof, for correction, and for training in righteousness, that the man of God may be complete, equipped for every good work,” it seems that even the early Protestant Reformers saw them as profitable in some way to the Christian life (2 Timothy 3:16-17, RSVCE).

If you haven’t read these books, I encourage you to make time this year to familiarize yourself! They are easy to find either through the links above or by reading any Catholic translation of the Bible (my go-to version is Revised Standard Version – Catholic Edition).

Resources on Catholicism: What Catholics Believe

Do You Know God Or Do You Simply Know About Him?

How to Create a Bible Reading Plan